Do you struggle with intrusive, anxious, or negative thoughts?  Let me explain a great little NLP technique to show you how to get rid of them.

The problem with intrusive thoughts is that it’s really hard to just ‘stop thinking’ them.  It’s like if I said to you ‘don’t think of a pink elephant standing in the corner of the room’ – then that elephant would probably pop right into your head and refuse to budge.

So rather than just trying hard to get rid of unwanted thoughts, a much better strategy is to use your creativity to mess about with them, scramble them, and change them to something positive.

Here’s the video version of this blog:

And here’s the text version:

How are you creating it?  Is it like a picture, or a movie playing in your mind of that terrible thing that could happen?  Is it a voice providing a running commentary of how awful and worthless you are?

If it’s a picture or movie:

Is it in colour or black and white?  Is it contained in a frame or panoramic?

Which direction do you hear it coming from?  Does it sound like it’s located at the front of your head?  The back, or either side?

Does it move around?  Is it in stereo?

Is it your own voice, or does it remind you of anyone else’s voice?

Is it high or low pitched?  Fast or slow?  What tone or expression does it have?

Find out as much detail as you can – this will provide you with ammunition for later.

Write down any details you can to describe how you’re creating the thought.

I emphasise the word how, because I don’t want you to start getting bogged down in the content of what the thought is about.  This exercise is all about the nuts and bolts of the way you’re constructing the thought – NOT what it’s trying to say.

This is where you get to have fun and use that powerful imagination of yours.

How do I know you have a powerful imagination?  Because everyone who suffers from anxiety and intrusive thoughts is using their imagination to create those thoughts.  It’s like you’ve been using your own creative superpower against yourself.  This exercise helps you to turn that superpower back from the dark side.

So – onto the scrambling:

You may have noticed that you’re starring in the movie, and it feels like you’re actually in it.  If this is the case, start by removing yourself from it.  Float yourself right out of the movie, back through the screen and into the cinema, so you’re watching the movie from the front row.

Now, get up and walk from the front row right to the back of the cinema and settle yourself down in a nice comfortable seat.

Go ahead and get some popcorn if you like.

If the movie’s in colour, change it to black and white.  Then make it fuzzy and pixelated.

Now shrink the screen down so it’s really tiny – the size of a postage stamp.

Get up from your seat and walk up to the screen, take that stamp and put it on a letter.  Address the letter to somewhere that’s as far away as you can imagine.  This could be the moon if you want – it doesn’t have to make sense.  In fact, the more ridiculous you can make it, the better.

Now, walk right out of the cinema, head down the road, find a mailbox, and post the letter.

If the unwanted thought is in the form of a voice:

Check which direction it’s coming from, then push it over to the opposite direction.

Now change the voice in as many ways as you can think of.

If it’s fast, slow it right down.  If it’s high, make it very low.  If it’s anxious and panicky, make it sound all lazy and chilled.

Now change it to a cartoon voice that resembles the changes you’ve already made.  Pick a voice that makes you laugh – the sillier the better.  Then imagine you have a remote control, and turn the volume down until it disappears altogether.

The reason we play around in this silly nonsensical way is so that you can stop taking that voice seriously.  Perhaps for years you’ve been listening to every word it says and paying full attention.

But negative and intrusive thoughts are usually totally irrational – not to mention completely unhelpful – so it’s important to remind yourself that they aren’t true by making them ridiculous in as many ways as possible.

Step 3: Replace the unwanted thought with a positive one:

Now that you’ve reduced that negative thought to a shadow of its former self, you want to replace it with something that’s really worth thinking.

So think of a really good memory.  It could be a lovely holiday somewhere amazing, or a party with people you love, or a time when you felt really good about yourself in some way.

Make it bright, bold and colourful.  Then float yourself right into that memory as if you’re really there.  Recall any sounds, scenery, feelings, and even smells or tastes.  Make it all as vivid as possible, like a 3D holographic movie.

Immerse yourself in this memory for at least 1 minute, just breathing it all in.

Repeat this whole process each time a negative or intrusive thought pops into your head.  Think of it like going to the gym for your mind.  You’ll get mentally stronger each time you do it.

Still finding it too difficult to get rid of unwanted thoughts?

If your thoughts are particularly upsetting or you’re struggling with mental health, it’s best to work with a counsellor or CBT therapist to get some personalised guidance and support.

Feel free to contact me at the link below if you’d like more details of one-to-one private sessions with me.

About LC Murphy
Lisa Murphy is a counsellor and hypnotherapist based in Glasgow who specialises in anxiety, anger management, and weight loss. 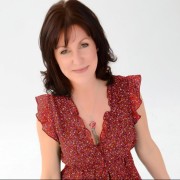 Lisa Murphy is a counsellor and hypnotherapist based in Glasgow who specialises in anxiety, anger management, and weight loss.

This site uses Akismet to reduce spam. Learn how your comment data is processed.

Lisa Murphy specialises in helping people resolve issues with anger, stress and anxiety. Sessions can be arranged online or on the telephone. Read more

This website uses cookies to improve your experience while you navigate through the website. Out of these, the cookies that are categorized as necessary are stored on your browser as they are essential for the working of basic functionalities of the website. We also use third-party cookies that help us analyze and understand how you use this website. These cookies will be stored in your browser only with your consent. You also have the option to opt-out of these cookies. But opting out of some of these cookies may affect your browsing experience.
Necessary Always Enabled
Necessary cookies are absolutely essential for the website to function properly. This category only includes cookies that ensures basic functionalities and security features of the website. These cookies do not store any personal information.
Non-necessary
Any cookies that may not be particularly necessary for the website to function and is used specifically to collect user personal data via analytics, ads, other embedded contents are termed as non-necessary cookies. It is mandatory to procure user consent prior to running these cookies on your website.
SAVE & ACCEPT